Biogas cover helps company produce up to 1.5 MW of electricity

LaForge Bioenvironmental operates a waste-to-energy facility in a northwest farming community of New Brunswick, Canada. The system is located on a 1,000 acre (405 hectare) mixed farming operation, which includes the LaForge Holsteins dairy. LaForge planned to expand its 500kW combined heat and power (CHP) system to more than double the capacity by converting an existing holding tank into a digester. Complete Senergy Systems (CSS), a digestion-based technology company, was contracted to develop the conversion.

CSS required a cover for the 200-foot-diameter (61 meter) concrete tank to collect biogas produced from the anaerobic digestion of mixed wastes. The cover had to be durable and resist changing environmental factors such as temperature, wind, sun, and precipitation. The cover had to allow for planned operations, including mixing and seasonal level changes, but also needed to be gastight to prevent biogas from escaping, which created odor and safety concerns.

Evoqua’s Geomembrane Technologies was contracted to develop a custom cover designed to suit the unique application with a focus on providing as many advantages as possible for operations and maintenance. The final design was determined through open dialogue between the developers, operators, and ​Evoqua’s Geomembrane Technologies. The perimeter connection of the cover to the tank is an example of a detail which needed to be simple, reliable, and cost-effective. Connections to the cover for gas piping were incorporated. 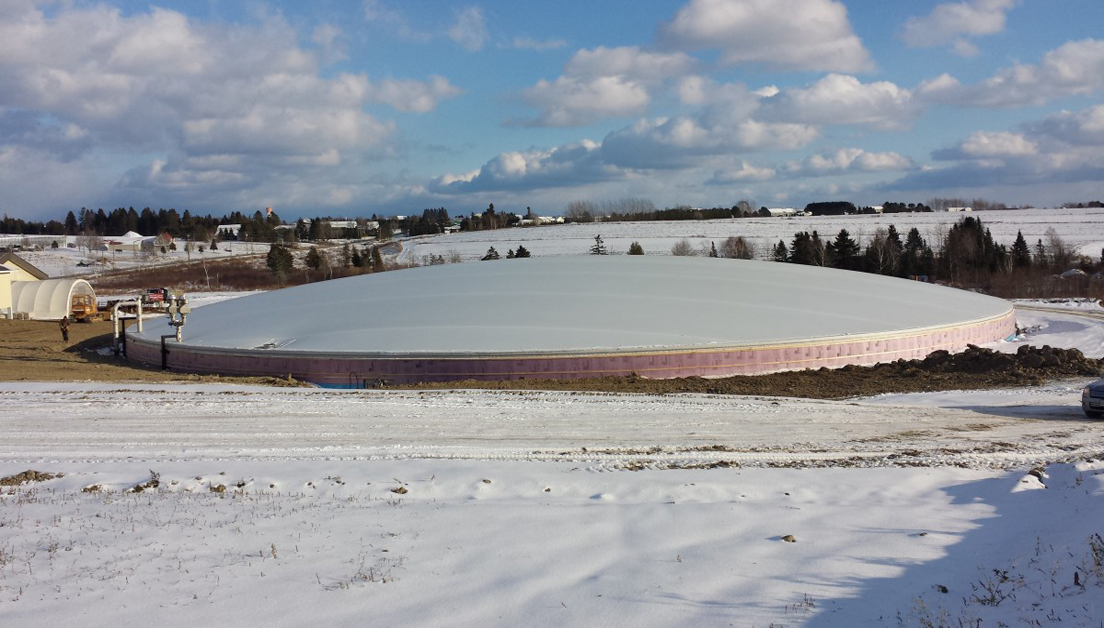 The LaForge operation now produces up to 1.5 MW of electricity and is tied into the New Brunswick power grid. The spent liquid is spread as organic fertilizer.

A durable weather resistant cover was required to collect biogas, allow for planned operations, and be gastight to prevent biogas from escaping