Municipalities are often faced with VOC contamination of their source wells. Chemicals like Vinyl Chloride and Trichloroethylene can leach into aquifers used as source water for municipal wells. When this occurs, in many cases the most cost-effective solution is to treat the water to remove the VOCs using air stripping, which has been established as a Best Available Control Technology BACT for this application. This challenge has grown recently with the promulgation of new regulations lowering the levels of Disinfection By-Products allowed in municipal drinking water. These byproducts, called Trihalomethanes or THMs, can be effectively removed with Carbonair’s STAT Low Profile Air Strippers. Other contaminants effectively removed by STAT Low Profile Air Strippers include Vinyl Chloride, Trichloroethylene and Benzene. When treating these compounds in municipal drinking water, Carbonair’s STAT Low Profile Air Strippers can often treat the water more cost effectively than the more commonly used granular activated carbon systems.

This project include the use of three STAT 720 low profile air strippers operated in parallel to remove dissolved Vinyl Chloride from three municipal drinking water wells. The maximum flow rate from each well was 1,000 gpm. Carbonair supplied the low profile air strippers, hurricane hold down equipment, blowers and master control panel with Variable Frequency Drives, automatic airflow control transmitters, acoustical cladding for blowers and acoustical enclosures for the blowers due to the close proximity of homeowners near the treatment system. A PLC was provided to provided automatic distribution of incoming water to one, two or all three air strippers dependent on how many wells needed to be operated based on the call for water. 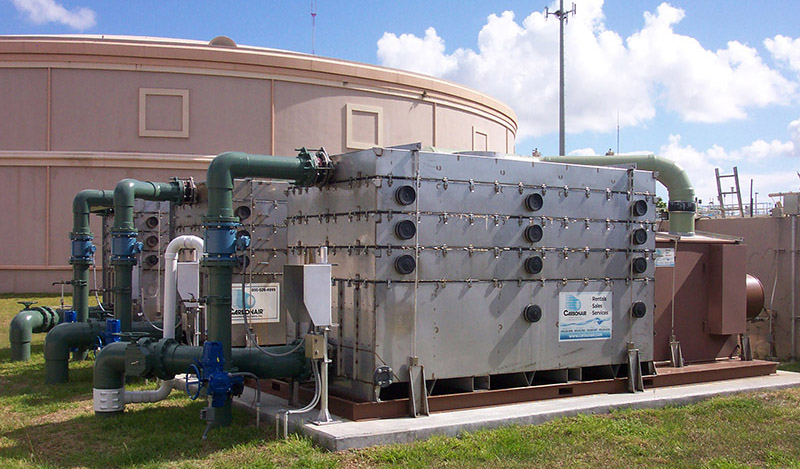 This project included the use of one STAT 720 low profile air stripper to treat one municipal well with TCE contamination. The unit is operated at an approximate liquid flow rate of 900 gpm based on the call for water from the municipal water system. Carbonair provided a design for a machine cover enclosure with removable roof for access to the treatment equipment demister and trays.

Municipalities are often faced with VOC contamination of their source wells. Chemicals like Vinyl Chloride and Trichloroethylene can leach into aquifers used as source water for municipal wells.

A more cost-effective solution that is able to successfully remove contaminants from Municipal drinking water.

Temporary Treatment of Drinking Water for a Municipality