Since 1956, Rothenbühler Cheesemakers has been producing delicious cheese using all natural ingredients and 100% Grade-A milk. Formerly known as Middlefield Cheese, the family-owned company is one of the largest Swiss cheese manufacturers in the United States. Its plant in Middlefield, Ohio, USA, produces five Swiss cheese varieties, as well as high-quality whey ingredient products.

Rothenbühler Cheesemakers was installing a new wastewater treatment system that would improve and simplify operations at its manufacturing facility. The chosen technology consisted of a large anaerobic reactor that was expected to produce a significant amount of biogas. Instead of allowing damaging greenhouse gases within the biogas to enter the atmosphere, Rothenbühler Cheesemakers wanted to contain it and use the biogas as a source of renewable energy, thus reducing its carbon footprint.

Evoqua’s Geomembrane Technologies was selected to design and install a 156 ft x 312 ft (48 m x 95 m) geomembrane cover system and a double liner for the wastewater treatment system at Rothenbühler Cheesemakers’ facility. The team also installed all the internal piping for the anaerobic reactor.

The gastight cover collects biogas while providing odor and temperature control. The cover was modified to accommodate biogas storage under the cover as well. It is specially designed to allow for low volume gas storage, handling both positive and negative pressures. A negative pressure beneath the cover system prevents the release of biogas and potential odors resulting from wastewater treatment.

The cover’s innovative design includes an access hatch, 20 clean outs, and 12 sample ports. Plant operators can walk across the cover to easily access tank internals for routine inspections and maintenance. 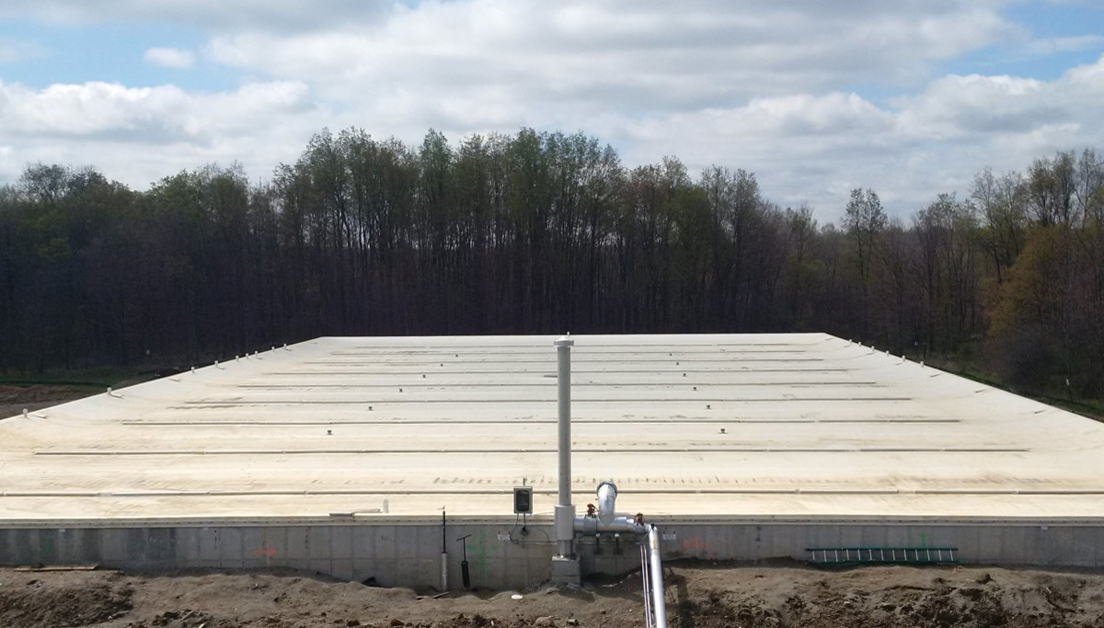 The gas collection cover that ​Evoqua’s Geomembrane Technologies provided for Rothenbühler Cheesemakers has helped the cheesemaker make better use of naturally-occurring biogas from anaerobic digestion. The biogas is collected beneath the cover and delivered to an on-site, dual-fuel boiler. At design conditions, approximately 320,000 ft³ (9,000 m³) of biogas is captured through the biogas system per day.