Many municipalities seek to control taste and odor issues to minimize consumer complaints, for aesthetic reasons, or to comply with health-based regulations. The most commonly reported taste and odor compounds, geosmin and MIB (2-methylisoborneol), are produced in surface water sources by naturally occurring cyanobacteria (blue-green algae) or actinomycetes bacteria.  Geosmin and MIB typically produce earthy or musty tastes and odors in water streams and can be detected at very low (part per trillion) concentration levels.

One of the technologies used to control taste and odor in drinking water is granular (GAC) or powdered (PAC) activated carbon.  In cases where taste and odor episodes are relatively short (only a few weeks), PAC is typically used until the episode passes. When longer treatment is required or there are other needs for organic removal, GAC should be employed.

Oftentimes, taste and odor episodes in drinking water are seasonal, mainly during warm weather months with mid/late summer being the peak for many locations. 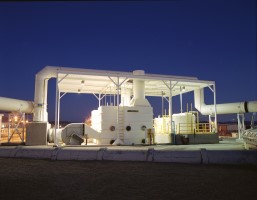 Evoqua offers a full line of Westates® GAC and PAC products for the reduction of taste and odor in drinking water applications. Our carbons are ANSI/NSF Standard 61 classified for potable water use, and are extensively quality checked at our state certified environmental and carbon testing laboratory. Our laboratory is fully equipped to provide complete quality control analyses using ASTM standard test methods in order to assure consistent quality of all Westates® carbons.